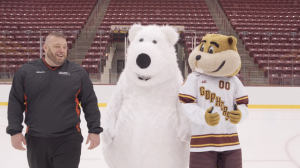 It was a whirlwind couple of weeks for White Bear Mitsubishi! A blooper reel meant to put smiles on the faces of their Facebook fans quickly brought amusement to an international audience.  You heard that, right? A local Minnesota dealership video went viral!!

How did we get to this unbelievable moment?

Let’s start from the beginning; White Bear Mitsubishi and Cuneo Advertising have enjoyed a long tenured relationship, one that melds a strong dealership brand with proven marketing expertise.  One look at the White Bear Mitsubishi Facebook page and you’ll see fan and employee participation on a wide variety of posts (as well as multiple visitor posts and reviews).  This active community would become the base for something special.

We can all agree that 2016 had seen its ups and downs…and downs and downs and downs as we limped toward 2017.  It was on that Friday the video was posted and the positive reactions were immediate!  Once live, the blooper reel post exploded with likes, comments, and shares including the General Manager of White Bear Mitsubishi (and local celebrity in his own right), Richard Herod III.

This was only the start.

Like spokes on a wheel (pun intended) the video branched out to a variety of niche communities: University of Minnesota fans, events and organizations White Bear Mitsubishi has supported, and those who’ve struggled with balance in winter conditions.

Christmas Eve saw White Bear Mitsubishi enjoy its best day for impressions with over 500,000! For perspective, 2015 saw just over 850,000 impressions FOR THE YEAR.  Perhaps to get away from in-laws (or celebrate with them), people turned to Facebook for some much-needed entertainment.  Christmas Day brought a little less engagement and we began to see a dip the next few days leaving one Cuneo Advertising strategist sure the viral video was starting its half-life descent.  Wrong! December 28th saw an uptick, the 29th beat Christmas Eve impressions, December 30th saw over 825,000 impressions, and the last day of the year saw nearly 1,000,000!

Virality can be unpredictable, and the first of the year saw a dramatic dip in impressions compared to that year-end high of 2016.

Okay, THIS is the descent, right??  By this juncture the White Bear Mitsubishi blooper reel had spread from Minnesota, to the surrounding Midwest region, to most states that have experienced an icy winter (we’re talking to you Washington and Pennsylvania).  Oh, and Canada.

Gotta check the view count one last time for the night…

A second spike emerges when two separate 1.5-million-likes Facebook pages—“I Will Go Slightly Out of My Way To Step On A Crunchy-Looking Leaf” page and the verified Bette Midler page—each shared the White Bear Mitsubishi video.  Those two shares, coupled with the individual, group, and other Facebook page shares, resulted in an astonishing 1.71 million impressions for the day. (For reference once again, 2015 had just over 850,000 total for the YEAR for White Bear Mitsubishi!)

January 5th saw another record day for impressions, and that Cuneo strategist is starting to feel like a weatherman who can’t predict the weather (no more predictions)!  By this point, White Bear Mitsubishi and Cuneo Advertising were just waiting to hear from Ellen (seriously, Ellen, if you are watching, Richard Herod III is a huge fan and would be over the moon to be on your show…call us!).

When all was said and done…

White Bear Mitsubishi wanted to provide a little humor during the holidays for its loyal social following.  Multiple variables lined up perfectly and the initial buzz drew the attention of the masses.  Going viral was not the goal, but rather, a positive side effect of connecting with their community.

We’ve enjoyed the ride (again with the puns) and hope you have too!

PS: The White Bear has recovered.

Check out the final spot.